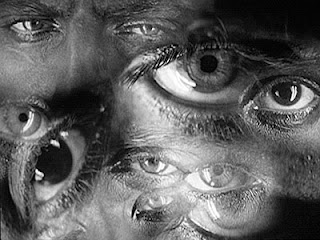 Well, actually not me, but you can certainly look at Jason Arnopp and Dan Turner because they had their first screening last night at The Moving Picture House in Soho, darling ones!

The place was heaving, very nice sandwiches and lovely drinks. I had sight of Jason in the crowd just when the first screening was announced. Air-kissed the very gorgeous Helen Smith when we were on the way into the second screening. Having followed the production of Look At Me on Jason's and Dan's blogs, I'm pleased to tell you that their short is excellent and should do well on the festival circuit. We had to dash immediately after but who should buzz us out of the building but the actor in Look At Me who ran the mysterious and sleazy Club 69 in the film we'd just seen!

You can view the teaser trailer here.

Next week, gala performance of The Other Boleyn Girl in Covent Garden.
Posted by Elinor at 05:24

Thank you so much for coming along, Elinor - and for liking the film into the bargain! That's quite a bonus. :-)

You're very welcome Jason. Thanks for the invite.

Sorry to have missed seeing you there... I looked for a wimple and everything but... nothing!

Bless you Jon, I went incognito...