The Other Boleyn Girl 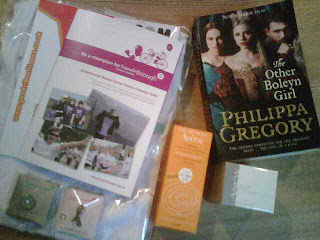 I saw this last night at the Odeon Covent Garden in aid of Breakthrough Breast Cancer.
It was packed out and Phillipa Gregory herself turned out to sign the free books and chat. She's releasing a new book about Mary, Queen of Scots in September - you heard it here first! She was very sweet and warm and completely unashamed about promoting herself and her work which is exactly as it should be. There was a raffle with a rather endearing set of prizes from premiere tickets for Leatherheads to a Laura Ashley bed linen set.
That done, we settled back to watch the support feature 'Ode to the Boob' about breast self-examination. I overheard a man two rows behind me saying he 'found that really useful'. Ohhhkay.
I shall post a lengthier review on The Smell of Napalm but I have to say this was a better film than Elizabeth: The Golden Age. Natalie Portman acts her socks off in a role that requires (shock! horror!) character complexity. Definitely worth seeing in an adaptation context (which is a hot topic on blogs at the moment what with Adrian Mead's class coming up and Lianne's discussion group).
The film was warmly received and we got goody bags! Avon eye-lift cream - result!
Posted by Elinor at 04:45

I really wanted to come to this but my play reading was on so it would have seemed a bit rude if I didn't go to that. Can't wait to see the film.

I think you will enjoy it, Pots. Cracking performances from the women.