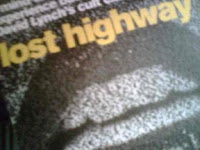 We here at Lock and Load like a night out at the theatre, so off we went to The Young Vic to see Lost Highway.
Playing to a packed house, this ENO production captured the strangeness of the original film and the visual power of the story very well. Granted it was a bit like being bludgeoned over the head. There was nudity, simulated sex, porno and a shiny red car onstage. Stand-outs were the singers playing Mr Eddy/The Mystery Man and Renée/Alice. This was a limited run but I bet you it will be back at a larger venue pretty soon.

In an age where you can watch films on your mobile phone, it's interesting to watch an adaptation that makes you sit in a room with other people.

In other news, I am interviewing Alexandre Aja (Producer/Screenwriter on the film P2) tonight by phone so I will report back next week.