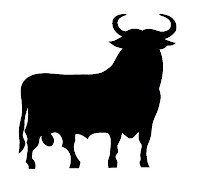 Lock and Load had a lovely time in Spain, mucho gracias. Just as soon as I've worked out how to do it, I shall post a short film of my future son-in-law running with the bulls in Javea. I think the poor boy thought it was some kind of test. The passing of which means he really can marry my daughter of darkness. Actually, that's not a bad idea. In any event, he ran like a trooper and only gave up when the bull nearly landed on top of him in the harbour.

It was Fiesta week in Javea so plenty going on. As well as the ex-pat community, it seemed to be a place where Spaniards came on their holidays as well. I shot a couple of racks of pool with son-in-law and nodded and smiled at a drunken Brit who assured us that England was run by 'Muslims and queers'. Fool. Everyone knows it's Satanists and lesbians.
Posted by Elinor at 10:58

Thank you FA m'dear! It's certainly good to be back.

Thanks Helen. Always good to have a retort handy, I find.