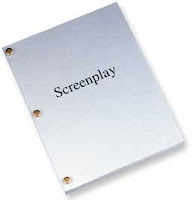 I had an excellent meeting with my lovely animator Jason last Thursday. Justin Hustlin goes into production BEFORE Christmas!
Seeing as 2000AD weren't interested in Penny Dreadful, I have decided to rewrite it as a comic strip myself with Jason illustrating it. He recommended having a look at The Umbrella Chronicles in terms of style. Anyone else read this? Also, whilst I'm on the cadge, does anyone know of of a 'how to...' book for comic book writing that they could recommend?

Saw Lucy and Lara yesterday for a read-through of one of Lucy's projects with like, REAL actors. This was an eye-opener for me as i'd never attended one before. Very absorbing and interesting to hear the actors' opinions on their parts. Lucy bore up very well in the face of some stiff critique. My buttocks did clench a couple of times on her behalf. A useful exercise as Lucy felt she had plenty of pointers for the rewrite. Off to the bar for a beer and a chat afterwards. You can't say fairer than that. Great to meet Lara too, that's the great thing about blogging, you feel you know people already.

Owen, one of the actors has an improv event going on at the Half-Moon Tavern in Herne Hill on the 23rd. I'll keep you posted.
Posted by Elinor at 05:50

OMG I didn't realise it was before Christmas, El! x

Not sure there's a great manual about writing comics [particularly if you're not a writer-artist]. Peter David's Writing for Comics got some decent reviews, people seem less enamoured of Denny O'Neill's The DC Guide to Writing Comics.

Probably the most helpful books are Writers on Comics Scriptwriting by Mark Salisbury, which interviews a bunch of different writers about their methods, inspirations, etc; and Understanding Comics by Scott McCloud, a primer to the invisible craft skills used to tell stories via sequential strip art.

Oh yes, Lara. Here at Lock And Load, we no longer sleep... xx

Ooh David, you're a Prince! I thought you might know and thanks for the offer, I shall be taking you up on that.

Good luck with it all - exciting stuff xx

I've got a copy of Alan Moore's 'Writing for Comics' which is essentially a long article, written in 1985 aorund the time of Watchmen, with a recent update. You're welcome to a loan of it, if you like, just email me your address.
x

Thanks Steven, that'd be great! x

Ta Pots and Helen. It IS exciting but there aren't enough hours in the day... xx