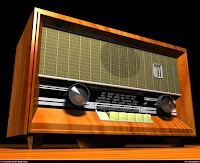 you may remember this post about writing for radio.

As Penny Dreadful has a budget that would make Terry Gilliam wake up screaming in the middle of the night, I thought I would rewrite it as a radio play.

Thus it was that I responded to a Shooting People post from the very lovely Steve Bond.
He has kept in touch as he liked the synopsis and we are hoping to collaborate.
You can visit his site here.

In other news, I decided to go for the NaNoWriMo this year as I obviously don't have enough to do. I'm inching forward on my Red Planet entry. I've gone back to a one-page pitch doc for Just Desserts which has been wonderful for clarifying just what the hell I'm going on about. Thank goodness Son Of The Pitch deadline has been extended! I shall report on production of Justin Hustlin next week.

It's a busy life but a full one. Lock and Load wouldn't have it any other way.
Posted by Elinor at 10:01

You know, El, I was thinking about doing NaNoWriMo as well this year - I figured it works out at just under 6 pages a day...mmmm, need to think. Fast. x

Yay, I'm going to do NaNoWriMo too. I was swithering, but decided I might as well bite the bullet.