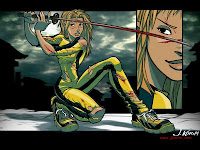 here are 3 interesting opportunities copied shamelessly from the WGGB newsletter.

Check out 'Notes from the Underground', London's new creative writing freesheet, on the web at www.notesfromtheunderground.co.uk. The editors aim to provide the very best in new short stories, cartoons, poems and non-fiction for their readers every issue and the publication is supported by their great website.

'Notes from the Underground' is intended to be a place where new and emerging writers can find a platform, so they want to see your work.

If you are a talented writer and want the chance to have your work read by over 100,000 people in the print version and countless more online, then go to their website and check out the submission guidelines.


The 2009-10 theme is "FILM NOIR" by Chicago artist Kristine Borcz (view at http://www.babeswithblades.org/competition.htm). BWB is soliciting scripts for production that are inspired by this image. In order for a script to qualify for the competition, the scene depicted in the image MUST APPEAR within the script.


The winning script will be produced in Spring 2010 as part of Babes With Blades' 2009-10 Season. The winning playwright will receive a $1000 cash prize.

118 118 need five new jokes every day for ever! (or at least for the moment) Writers will retain rights to joke but must not sell to any other media for at least a month. If you’re a stand up you can continue to perform the gag. Jokes must be sent to jack@jackmilner.com

WHAT SORT OF JOKES ARE WE LOOKING FOR? Original (no old re-workings please) funny, new jokes More specifically, they must be no longer than 110 characters (including punctuation and spaces), they must be reasonably clean and laugh out loud funny.

The target audience is 16-34. Try to imagine a 25 year old on a Saturday night texting JOKE to 118. Back comes a funny – he or she then laughs and sends it to their mate and even tells it to friends. Jokes from Writer’s Guild members or from writer’s with agents will be paid at the rate of £30 per one line gag.

Jack Milner is the producer and editor for this project. You can find out more about him on www.jackmilner.com.

Any questions then feel free to email jack@jackmilner.com
Posted by Elinor at 07:47

I wrote a short story once and posted it in my old Blog, I think it was then that people realised I had a strange strange brain. The main character was called Snorebag Cheesgullet and it featured a man who had lost his legs in an accident and had been sewn onto the back of a Llama.

Thanks very much for sharing Mr B. I see absolutely no reason to disagree with that realisation concerning the strangeness of your brain. But pray tell, which one of the three opportunities will you be submitting that idea to?

None, I am not a writer.

Although a text saying "This text just cost you £1.50, laugh now fuckface" would amuse me anyday of the week...except Tuesdays.