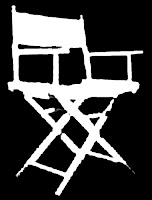 the script I was developing for production in August has been rejected. Ironically, in his rejection, the director gave me precisely the kind of feedback I'd asked for much earlier in the process (but couldn't get out of him!) to help the rewrite. *sigh*. Right, moan over, onwards!

Nina Conti was FAB! Crude, funny, offensive - all of which went down a storm with the small but eclectic audience at the Soho Theatre. The elderly gentleman next to me seemed very keen but I wasn't having any of his bawdy shenanigans and in any case his remand case worker turned up. Tom Conti was in the foyer to show support and it was all very dolly and informal and mercifully a million miles away from any celebrity-style haughtiness.

Events gather apace on the writers' group front! We are developing a showcase of six pieces to be performed in front of an invited audience in the autumn. The actors and directors have been assembled for rehearsals on the 1st July. More as and when.
Posted by Elinor at 10:36

Sorry to hear about the script. Must be so frustrating to get the comments way too late.

As for Nina Conti, she is a very naughty girl. But very, very funny.

Thanks my dear! All good experience, she said, gnashing her teeth...

Sorry to hear about the script. What a nightmare. Good that you've got other projects to keep you going. Chin up xxxx

yeah booo about that. and pooo, too.

but the grass isn't growing under your feet so it's all good. x