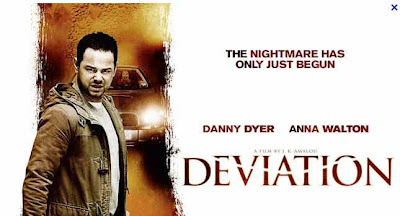 it's always a pleasure to go to a screening. Doubly so when you really enjoyed yourself. How marvellous then to brave the uncharted territory of Holland Park at the behest of the production team behind Danny Dyer's latest 'Deviation'. I must say the advance word on Mr Dyer's performance was bang on the money. His psychopathic character, Frank, veers from the psychotic to the child-like and back again most convincingly, with nary a trace of his more accustomed 'geezer' persona. He was well-matched by Anna Walton's Amber, the nurse he kidnaps who is determined to come out of this alive and rejoin partner and child. Those anticipating by-the-book psycho/victim scenarios should move along. Frank is complex; as vulnerable as he is nasty. Amber is, refreshingly, NOT a screaming helpless victim. She's resourceful and contained. The understatement of her persona playing well against Frank's wild mood swings.

I particularly liked the use of locations that seemed positively dystopian in their desolation and grimness. Industrial estates, scrapyards and abandoned buildings that only heightened the terrible isolation experienced by Frank and Amber psychologically.
These are the urban hinterlands that we all don't see as we move about in our daily lives, which serves the story well as Amber's attempts at escape are frustrated time and again.