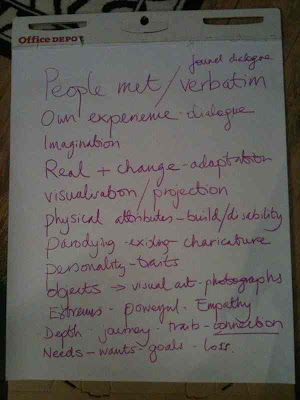 this workshop took place on the very set of ‘Skinheads', currently part of the Write Now 3 festival taking place at my local theatre, The Brockley Jack.

Some of m’colleagues had done other workshops that were also part of the festival but this worked just as well as a standalone event, I thought.

We started by having a character we are currently developing introduce us, the writers, to the rest of the group. There followed some discussion about what made a memorable character with David encouraging quieter members of the group to contribute.

After this, we considered how characters evolve; either through the ‘method’ in which case the actor went through the same things as the character (internal process) or, choosing a prop or a voice or a characteristic to enable the actor to get inside the character (external process). This was followed by an exercise in which we were given ten questions to ask of a fresh character and to answer them. This was fascinating as it really gave you some good back-story. The focus here was characters for the stage but We chose a name for our new characters and with the answers in mind, chose two or three objects and a ‘smell’ picked at random with which to construct a short story that began with the words: ’The greatest thing I want in life…‘

I’ve included my work to give you an idea of the process.

The character I want to develop for a stage play is the last Apollonian Oracle who was officially outlawed in A.D. 391 by the Emperor Justinian. I had her introduce me thus:

‘This is my devotee, Elinor. She’s a writer upon whom I’m counting to recreate the final moments of my religious power. She has a great interest in creating complex female characters and narratives that centre on female experience. She’s also fascinated by the power dynamics of the family and how early experiences play out later in life.’

David then asked us ‘what makes for powerful characters on stage?’

Empathy
Presence
A chance to engage with characters on stage
The character’s journey
Identifying with what’s at stake for the characters
Characters are not often killed on stage though the ‘whiff of death’ can be evoked at times of loss
The questions were rooted in What/Where/ Why/Who/When?

Other than that we could construct them as we saw fit. There wasn’t a huge amount of time to faff!

Q1: Who are you?
A: I am the last Oracle of Apollo in the reign of the Emperor Justinian in A.D. 391
Q2: What do you do?
A: I am the mouthpiece of an underground cult devoted to the worship of Apollo.
Q3: Where do you live?
A: In a well-guarded labyrinth in Eumaea
Q4: How much money do you have?
A: I am richer than Croesus.
Q5: When were you born?
A: A.D. 351
Q6: Why do you do what you do?
A: I am the voice of Apollo, dispensing prophecy and wisdom to his followers.
Q7: What God do you believe in?
A: I believe in Apollo though I may be forced to change my allegiance.
Q8: What lengths will you go to in order to survive?
A: Any lengths.
Q9: Who would you die for?
A: No one.
Q10: Who would you kill for?
A: My daughters.

There are loads more questions that you could ask! David thought thirty questions would be a good number to really develop your character’s story.

Two other good ones were:
Whom do you love?
What frightens you?