REVIEW: The Gospel According to Saint Derek

thus it was that I and some friends entered the hallowed halls of King's College unto the very Anatomy Theatre, that even now, harbours a faint whiff of chloroform and formaldehyde (I couldn't help thinking that DJ would have liked that), there to watch an excellent short film by Andy Kimpton-Nye recalling the creative process of Saint Derek Jarman. What surprised me most was the testimony of former collaborators regarding Jarman's playfulness. Perhaps this aspect of his creative persona became rather overshadowed by the spectre of the HIV status that finally killed him. There is also the tendency to regard so much of arthouse or experimental cinema with a seriousness that is not always appropriate. Jarman's colleagues recall his spontaneity; the way in which he used low-budget or even no-budget constraints to inform and inspire his process, which makes his filmmaking very pertinent to today's generation of digital creators. The Ten Commandments of Low-budget Filmmaking structured the documentary. There was poignant reflection on his acceptance that his life would be foreshortened, but even this was became part of the great work, which now sees his wonderful strange garden in Dungeness as a unique English space that we can still enjoy. You can check out all the details here. I was sorry to miss the chance to see 'The Angelic Conversation' played on a loop for 24 hours in the King's College Chapel, but I may well see if I can go on the trip to see the garden of Saint Derek in June. 'The Last of England' will play also in March, a film that is always in my personal top ten. I hope this excellent doc gets the exposure it deserves, it's required viewing for today's generation of film creators. 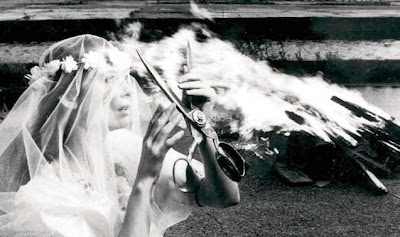