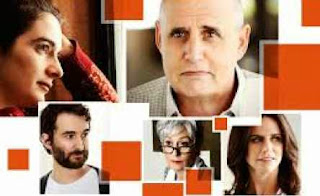 you don't need me to tell you that Transparent is available on Amazon Prime, or that the main character is a man who decides to dress as a woman at the age of seventy, but you do need me to tell you about the swanky launch last night at the Soho Hotel, an achingly hip home from home for many a celebrity. I didn't personally spot any but then I'm so shortsighted, I'd have to be engaged to one to get close enough to recognise them, though someone did say that Katie Price had been spotted! Well obviously I needed two glasses of free wine to cope with this, not to say the many delicious canapés that came my way.
I'd just got chatting to a nice lady from one of Amazon's ad companies when the chance arose to have a brief word with Jill Soloway; writer, director AND executive producer of Transparent. Clearly the woman has given up sleep. We chatted about the possible controversy that Transparent is bound to encounter. It seems that the cis versus trans woman debate is as hot over the pond as it is here. Jill mentioned that no one says transvestite in the U.S. They just say trans. A brief discussion on transvestite luminaries such as Eddie Izzard and Grayson Perry and she was whisked away to chat to other press folk. We all filed in to a very plush cinema and settled ourselves for two episodes of Transparent after a welcome from Amazon executive Joe Lewis.
I'm pleased to say that Transparent is funny, dark and very engaging. Mort/Maura (Jeffrey Tambor) finds the heart of his character in the best sense. Exactly how do you come out as trans to your family? Especially when each family member seems to be harbouring their own issues: Sarah Pfefferman (Amy Landecker) is attracted to an ex-girlfriend but is married to the father of her children, Josh Pfefferman (Jay Duplass) seems to have the perfect life as a music producer and really longs to make his own family, but somehow can't resist visiting his old babysitter... Abby Pfeffernman (Gaby Hoffman) is the most rootless. She's open and vulnerable but longs to find out who she really is. Shelly (Judith Light) is divorced from Mort and remarried but loves all of her children, even if that love is laced with anxiety and served up with guilt. It would be very easy to dismiss them as Los Angeles stereotypes with first world problems but actually, I thought they settled in as complex and endearing from the start. It's certainly explicit, with scenes of a sexual nature. My only cavil: Not enough male nudity! Is this the last great American squeamishness? There was certainly plenty of female flesh on display.
Afterwards there was a Q & A with Jill Soloway and Jeffrey Tambor. It was clearly a labour of love for JS; one of her parents had decided to ome out as trans a few years ago, and she was at pains to explore the implications of this decision without pandering to stereotypical assumptions about what the paying Amazon audience wanted. JT leaped at the chance of playing Mort/Maura, bringing a quiet humanity to his portrayal. Trans people were employed in all sectors of the production and extensive research undertaken to make it all real. It was well received by the audience at the Soho and I think it'll be a smash on Amazon Prime. It's that rare beast; a popular show with impeccable integrity.
Posted by Elinor at 11:18