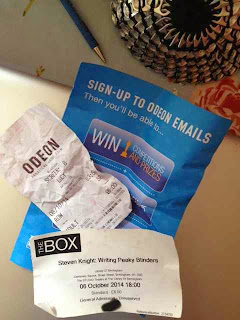 finding myself at a loose end in the fair city of my birth - Birmingham, I checked out the Odeon New Street, where the latest from Luc Besson was to be seen. 'Lucy' is preposterous, stylish, violent and sometimes utterly heartless, but strangely, I was very moved by the end.


Luckily that finished in time for me to find the new Birmingham Library (which is gobsmacking and worth a visit in itself), meet up with my brother and take our seats for a q and a with Steven Knight, creator of Peaky Blinders. He was there as part of the Birmingham Literary Festival. Like a lot of writers he was full of funny stories and insights into the creative process while at the same time coming over as ordinary and down to earth. The audience was packed with fans of the series, many of whom had grandparents who could recall the Peaky Blinders, Jimmy Jesus and other characters of the time. There was even talk of Charlie Chaplin being born in Birmingham. This could not be confirmed but had become an urban legand in itself. It was a matter of record that Chaplin employed two of the Brummagem Boys for *ahem* 'security purposes'. Anyway plenty of questions from the audience amid much reminiscence about Birmingham slang. I can certainly remember saying the word 'scraze' when you hurt your knee as a kid and I can recall my grandad calling me 'wench'. Peaky Blinders season 2 has just started.