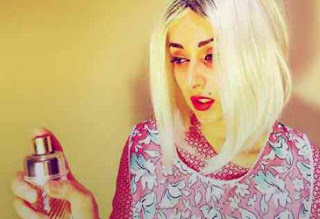 allow me to declare an interest here; I used to childmind the divine Miss Emily Bee when she was knee high to a grasshopper (to exhaust the insect metaphor). I remember very clearly when she was four years old coming downstairs with four kittens hanging from the arm of her coat, so I think the theatricality was there even then. Thus it was that we entered the hip environs of Shoreditch on Halloween, there to find Rich Mix and the upstairs venue that Miss B was gracing with her new show, Eau De Toilette; the poignant tale of a young illegal immigrant whiling her life away cleaning the toilet at a night club in London.
And what a show it was! Emily's accent was faultless as she wryly detailed her duties, treating us every now and then to a peek in the giant toilet behind her. Various sound effects reminded us of her clients; most notably a hen party that gave Emily a wedding veil and the opportunity to break into song. The toilet water became a mirror, a screen for memories and ultimately, a way of escape as Emily's attendant decided to follow her dreams and leave her dead-end existence - but not before she treated us to a rendition of 'Part of your World' from The Little Mermaid, her legs rendered mermaid-like with paper towels. The sound work was very powerful and included throat singing! Emily used her workaday props with great inventiveness, attaching a toilet roll to her head and draping herself in a towel to evoke the trance state of whirling dervish. It was an excellent show; thought-provoking, funny, poignant and ultimately very moving (pun intended). I look forward to her next project. You can check Emily's work out here: Emily Bee
Posted by Elinor at 05:54