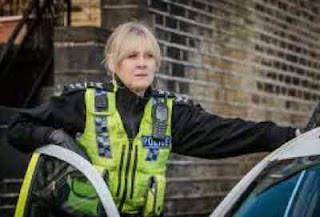 Sally Wainwright came across as a straight-talking exponent of her craft last night, not unlike the protagonists in her scripts. Marc Lawson interviewed her amid clips of drama old and new; from an episode of 'Coronation Street' to 'Happy Valley'. There might have been 17 years between them but Sarah Lancashire was in both. Interestingly, SW thought the Corrie clip was way too wordy and was grateful for the subtext she'd learned by the time the clip from Happy Valley was shown. SW loved working on Corrie because of their respect for writers. Other soaps she'd worked on used script editors to rewrite the scripts. Corrie allowed her to develop her own voice whereas other soaps felt homogenous by comparison. Interestingly, SW felt that the soaps' competitive ramping-up of incident detracted from the drama, which she felt was better evoked by the drama that comes from the humdrum. She believes that dialogue is innate in the writer. Once you have the story worked out, the dialogue should flow from the situation.
There was some discussion of the importance of backstory and how useful it is in forming character. In 'Unforgiven' SW was conscious of the fact that despite her protagonist's incarceration, her fifteen years away meant that much of her past remained unresolved and was waiting for her upon her release.
The violence of Happy Valley was debated. SW directed episode 4 (where Catherine rescues Ann), but felt that the violence was not at all gratuitous; on the contrary it was entirely realistic. The power of the scene lay in the two women rescuing each other. It was still novel to see a female police officer be attacked. The gritty dialogue included swearing, which to SW seemed like the normal rhythm of speech.
In terms of process, SW likes to write detailed scene breakdowns, including the thought processes of her characters. SW studied and read a lot of Ibsen when she was younger, from whom she learned that subtext is all. She said she couldn't watch her work if she felt it was badly directed. She was mentored by Kay Mellor, which SW said was invaluable, as KM was such a trailblazer with 'Band of Gold'.
SW writes a series bible as both a selling document and a blueprint for casting. She felt that every new scene should come from slightly left-field. She liked to write the third episode first and was always amenable to cutting the last line of any scene. She didn't care for being pigeonholed into 'nothern' drama as she felt her themes were universal and would be understood anywhere. It was a question of vernacular.
Current projects include a biopic of the Brontë sisters and another series of Happy Valley. This brought up the subject of doing your research. When reimagining 'The Wife of Bath' and 'The Taming of the Shrew'. SW really enjoyed having such a wealth of material with which to work. She agreed the Taming of The Shrew was a contentious subject for the modern age, with its empasis on female submission.
SW discussed showrunning with reference to 'Scott and Bailey'. She didn't like to rewrite other writers' work but would if that was what was required. 'Last Tango in Halifax' was more autobiographical, with its emphasis on the lives of older people. It was turned down until Danny Cohen (programming Director, BBC) was approached. He approved the idea and so it was made.
There were some very interesting questions from a well-informed and appreciative audience. SW liked Nurse Jackie, and Breaking Bad, though confessed to not watching a huge amount of TV. She didn't feel that screen action should be too prescriptive in the script. She felt that female writers bring a different sensibility to writing and actively preferred to write female characters as they are more emotionally articulate. She didn't do too much rewriting as she liked to build a script with a solid foundation, feeling that addressing those issues while drafting prevents too many drafts being written. She was conscious of, and keen to, address the lack of multicultural diversity in TV drama, feeling that to write a character with a different ethnicity required careful and thorough research.