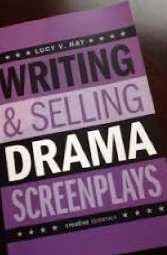 If, like me, you have the good fortune to know Lucy personally, or you’ve had the sense to check out her excellent Bang2Write blog, you’ll know that she’ll have no truck with jargon or unnecessary mystification of the dark art of screenwriting. This book cuts - as ever - to the chase, decoding the elusive drama film. I must confess I’m more of a genre freak than I realised! I haven’t actually seen that many drama films, shying away perhaps from the emphasis on emotion and internal conflict.
Lucy lays out the difference between dramas and other genres in a friendly humorous way that doesn’t make your eyes bleed. I think her exhortation to make a character’s life challenging rather than full of unmitigated misery is the thing that stands out for me. Also the way in which she identifies the various types of drama story and how to write good, believable characters without resorting to clichéd stereotypes.
I particularly enjoyed the case studies, some of which I’d seen and some not. I watched ‘Hours’ and ‘Blue Valentine’ with Lucy’s words very much fresh in my mind. I also admired the unflinching way in which she acknowledges that it is difficult to write a great drama script that producers will want to make, but she is also endlessly encouraging to the writer. Like I said earlier, she demystifies the process.
In keeping with the other titles in the Creative Essentials series, this is a book for writers at every stage of their development and is a must-read for anyone finding their way through the financial maze of production. I think film students will find it very approachable, due to its common sense. Lucy writes about drama as though she’s sitting in the room talking to you about it, and you can’t get better than that.