Review of An Alex Cox’s Introduction to Film: A Director’s Perspective 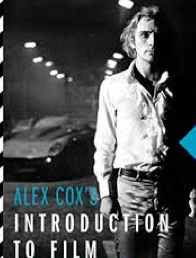 Whether you’re already established as a creative in the film world or contemplating a course of study or vocational training, then this book by Alex Cox will give you great insights into the filmmaking process, from idea to production to cinema.
The bonus with this book is that Cox recommends various films and clips for you to watch interspersed through the text, together with his thoughts on the process, drawn from his own career and experience. This is, of course, the perfect film book for the internet age, as there’s never been better availability of the content he signposts. He also provides interesting further reading lists should you wish to explore specific areas more deeply.
That said, this is a highly personal and eclectic journey through film history and the influences and figures in filmmaking that Cox thinks are worth further investigation. Therefore the reader must bear in mind that hardly any female filmmakers are represented here, though this reviewer was pleased to see mention of Marleen Gorris and her marvellous film A Question Of Silence, (certainly a groundbreaking film in terms of gaze for this reviewer). I hardly think this is intentional on Cox’s part – like I say, this is a highly personal account and Cox notes that countries with repressive attitudes towards women often don’t make great art. Not that Cox’s observations are superfluous on the greats like Hitchcock or Kubrick, who, whatever you may feel about their work can only be admitted as iconic filmmakers.
The most interesting section for me was on world cinema with the Latin American canon coming under the spotlight. I do love a film book that teaches me something new. I’ll certainly be checking out some of the Latin American films he suggests, specifically El Angel Exterminador (The Exterminating Angel), cited by Cox as a brilliant use of resources, as the characters are all trapped in one room.
In a way this book serves as a primer for our own reflections on how we are influenced historically and culturally as creatives. It would be interesting to consider, say, ten films that have influenced our own process, but perhaps that’s for another blog post. I think Kamera Books have hit a rich seam here and I look forward to other filmmakers’ perspectives on their craft.