Taster for ‘The Other Twin’ by Lucy V. Hay 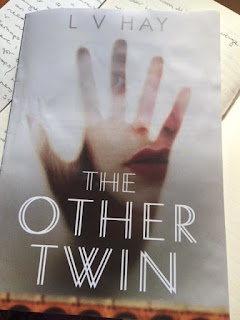 I’ve never read one of these taster booklets before but what a good idea they are! Let me declare an interest here: I went with Lucy during the Brighton leg of her research period for the book. A great time was had as we drank in the local pubs – well, I drank; Lucy made copious notes.

There’s an art to these tasters, clearly. Chapters must be excerpted in such a way as to set up curiosity in the reader. Job done here, I must say. I particularly like the sense that bad things can happen in ‘good’ (rich) families; the shadiness of some aspects of social media culture; and the eloquently allusive online messages from India to Jenny that hint not just at the transcendence of love but at the transcendence of death and possible rebirth.

Protagonist Poppy’s own journey also intrigues; she’s indomitable in her drive to discover what happened to her sister but has issues of her own to resolve along the way. She may not even be likable but she certainly comes across as compelling in this extract. The prose is spare, incisive and written with urgency as though the reader must find out the missing pieces of Poppy’s jigsaw, what happened before India’s awful fate, and who exactly Jenny is before it’s too late. The book is released later in the year, you can pre-order it here.