Review: Charles and Ada - The Computer's Most Passionate Partnership by James Essinger 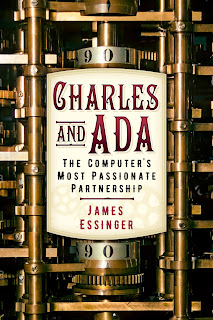 Every now and then on the internet, usually Facebook, screenwriters post about unsung figures from history who deserve a biopic. Ada Lovelace is always mentioned in this context. It was this connection that first intrigued me when this book about Charles Babbage and Ada Lovelace became available for review. It is clearly a passion project for the author James Essinger, who has written before about Ada and also about the Jacquard loom, an invention that was the inspiration for the machines that Babbage created. If you're interested in Jacquard looms, check out the videos on YouTube. Most illuminating.

That's the great thing about Babbage and Lovelace; what they were discussing in the 1800s has a direct connection to the devices we take so much for granted today. This, of course, is not startling. Babbage's Difference and Analytical Engines are a matter of fact. What Essinger's book seeks to do is to throw light upon the nature of Babbage and Lovelace's friendship and to thankfully rehabilitate Lovelace's reputation from being a mere sidenote in history.

Babbage was, by all accounts, somewhat difficult in character; not surprising when you think that he didn't enjoy a close re;ationship with his father (though he did with his mother) and lost a beloved wife and daughter at a young age. He was a wealthy man and so had the distractions of his machines and a sparkling London social life.

Ada Lovelace as Lord Byron's daughter might well have been expected to lead a traditionally genteel life, marry well and live down her errant father's madness and badness but instead she annoyed her mother by pursuing an interest in flight and mathematics, and by collaborating with Babbage who was many years her senior. She was an educated woman who translated a paper by Menabrea and included extensive notes on Babbage's Analytical Engine. She was in many ways an interpreter of Babbage's work and once offered to act as a kind of agent to get his machines finished, as Babbage had failed to secure governemnt funding due to his intractable nature. It's stunning to think where we might be now, had computer science advanced dramatically at the time.

It's a fascinating story, extensively researched by the author who quotes from many extant letters. As he admits, we can only guess at anything other than professional collaboration between the wealthy would-be engineer and the aristocratic lady. Their close and fond friendship was the springboard for much intellectual and influential thought.

The author's style of writing is very interesting; he seems to be channelling the prose style of the age, which at first irritated me but after a while I came to enjoy it. It was as if Essinger was looking over Charles and Ada's shoulders as they wrote to each other. Surely a biopic of their friendship cannot be far away...

Author Bio:
James Essinger was born in Leicester in 1957 and has lived in Canterbury in Kent since 1986. He was educated at Wyggeston Grammar School for Boys, Leicester, and at Lincoln College, Oxford, where he read English Language and Literature. He spent much of his time between 1981 and 1983 teaching English in Finland before working in public relations in London and then in Canterbury. Since 1988, James has been a professional writer.

His non-fiction books include Jacquard's Web (2004), Ada’s Algorithm (2013), which is to be filmed by Monumental Pictures, and Charles and Ada: the computer’s most passionate partnership (2019) His novels include The Mating Game (2016) with Jovanka Houska, the film rights of which have been optioned, Rollercoaster (2019) and The Ada Lovelace Project (forthcoming in 2020).