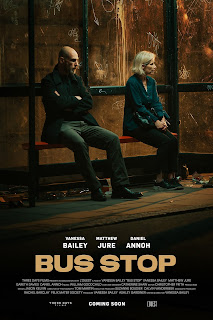 Bus Stop is the perfect example of the short film as exquisite gem: Two people out late at night in London have an encounter. We think, because it's London, because it's late at night, that this will be tense, violent even but then our expectations are turned on their heads. Don’t you love it when that happens?

It’s a masterclass in restraint: the shadowy bus stop, the antagonism-below-the-surface mood of the capital at night, but especially the performances by Vanessa Bailey and Matthew Jure. The bleakness of their spirits seems to have seeped into their environment - or vice versa. Yet, despite this, the characters connect; a few words are exchanged and the world seems a friendlier place.

If you know Vanessa Bailey's last film Seeing Him at all, you will know that there is a core of profound emotion at the heart of her work. That's the beauty of short film, it can pack a punch in a way that is sometimes dissipated in a longer piece.

Check out the Facebook page for the film here: Bus Stop
Posted by Elinor at 12:20