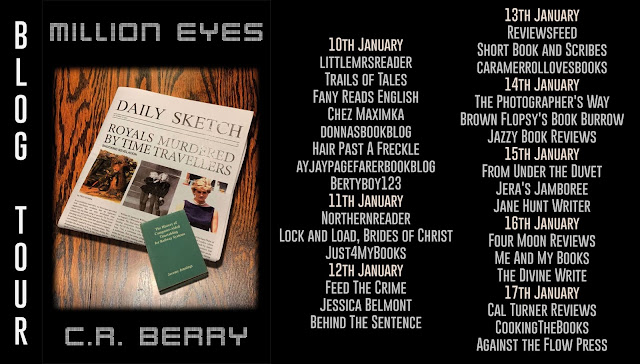 How do you fight an enemy who has a million eyes?

What if we’re living in an alternate timeline? What if the car crash that killed Princess Diana, the disappearance of the Princes in the Tower, and the shooting of King William II weren’t supposed to happen?

Ex-history teacher Gregory Ferro finds evidence that a cabal of time travellers is responsible for several key events in our history. These events all seem to hinge on a dry textbook published in 1995, referenced in a history book written in 1977 and mentioned in a letter to Edward III in 1348.

Ferro teams up with down-on-her-luck graduate Jennifer Larson to get to the truth and discover the relevance of a book that seems to defy the arrow of time. But the time travellers are watching closely. Soon the duo are targeted by assassins willing to rewrite history to bury them.

Million Eyes is a fast-paced conspiracy thriller about power, corruption and destiny.

CR Berry caught the writing bug at the tender age of four and has never recovered. His earliest stories were filled with witches, monsters, evil headteachers, Disney characters and the occasional Dalek. He realised pretty quickly that his favourite characters were usually the villains. He wonders if that’s what led him to become a criminal lawyer. It’s certainly why he’s taken to writing conspiracy thrillers, where the baddies are numerous and everywhere.

After a few years getting a more rounded view of human nature’s darker side, he quit lawyering and turned to writing full-time. He now works as a freelance copywriter and novelist and blogs about conspiracy theories, time travel and otherworldly weirdness.

He was shortlisted in the 2018 Grindstone Literary International Novel Competition and has been published in numerous magazines and anthologies, including Storgy, Dark Tales, Theme of Absence and Suspense Magazine. He was also shortlisted in the Aeon Award Contest, highly commended by Writers’ Forum, and won second prize in the inaugural To Hull and Back Humorous Short Story Competition.

He grew up in Farnborough, Hampshire, a town he says has as much character as a broccoli. He’s since moved to the “much more interesting and charming” Haslemere in Surrey.

One of my all-time favourite stories by that titan of SF, Ursula K Le Guin, also deals with timelines and alternative realities. That novel is called The Lathe of Heaven. Its hero labours under his ability to alter reality in his dreams and outwit those who would manipulate his talent for their own nefarious ends. Small wonder then, that I was drawn to Million Eyes by CR Berry.

Million Eyes adopts a similar conceit: an all-powerful tech company manipulates British history in order to protect its own business and thereby precipitate world domination (I trust the reference to Le Guin will please the author!). It does this via a remarkable book masquerading as a dull railway timetabling textbook. I feel this is the novel's great strength. Crucially, the 'impossible book' and its true purpose is revealed slowly.

Cleverly, Berry blends fictional characters and real people, tapping into the obsessive reverence in which notable royals are still held. Berry has created a well-paced and researched novel that convinces in its adherence to its own rules of time travel - a difficult feat in Speculative Fiction where world-building is key.

If the villains are a tad one-dimensional in their Machiavellian wickedness, then the heroes - and there's a few of them are agreeably flawed and complex and above all relatable. the eventual fate of Jennifer Larson will break your heart, but in the best way. With our TVs and streaming services awash with series and films about royalty, the plot strand in Million Eyes involving British royalty will appeal to many even as it repels a few. Along with the 'impossible book' this is the novel's great strength. Why are we so fascinated by royalty? It is perhaps because we can only ever speculate about who they truly are. They remain essentially mysterious. I also loved the appearance of London itself as a character, particularly in the final act.

Thanks so much for that wonderful review! (And for that extremely flattering comparison to Ursula K Le Guin!)

Great to have you on the tour :)