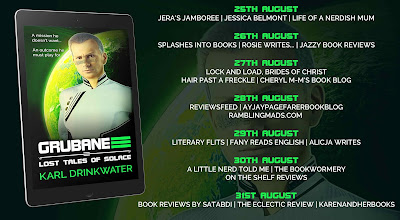 Major Grubane is commander of the Aurikaa, the most feared cruiser in the UFS arsenal. His crew is handpicked and fiercely loyal. Together, they have never failed a mission, and their reputation precedes them. But this time he's been sent to a key planet that is caught up in political tensions at the centre of the freedom debate.

What he thought was a simple diplomatic mission turns out to be the hardest choice of his career. His orders: eliminate one million inhabitants of the planet, and ensure their compliance.

Grubane has also rediscovered an ancient game called chess, and plays it against the ship AI as a form of mental training. But maybe it could be more than that as he finds himself asking questions. Can orders be reinterpreted? How many moves ahead is it possible for one man to plan? And how many players are involved in this game?

MY REVIEW: Two things struck me about this economically told tale: the first one was the sheer scope of Grubane's universe. The second was the character of the Aurikaa's AI.

This universe shows how essentially nothing changes in terms of warfare and dominance, for which the game of chess is both symbol and tactic. It's touching too, to see the development of the relationship bewteen the AI and Grubane, particularly its feelings for him. It recalled to me many of the ideas currently circulating in science and storytelling. Can artificial intelligence have a soul? I would say yes, on the strength of this story.

I also very much enjoyed the activities of the loyal crew, their names and responsibilities were intriguing. As was Grubane, the very epitome of the loneliness of command. The novella delineates all this with an economy that puts many other more verbose stories to shame. The same is also true of the dialogue between Grubane and the leaders of the planet he has been sent to dominate. Crisp and to the point, it drives the story most effectively. It keeps a good pace with no longeurs. You can't say fairer than that.

AUTHOR BIO: Karl Drinkwater is originally from Manchester but lived in Wales for twenty years, and now calls Scotland his home. He's a full-time author, edits fiction for other writers, and was a professional librarian for over twenty-five years. He has degrees in English, Classics, and Information Science.