I stopped the traffic in my maidenform bra 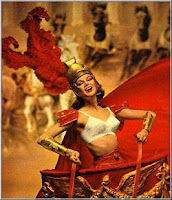 It's true. I stretched it across three lanes of the M6.

So anyway, I went to the BICS competition and gave a ten-second pitch to the panel (including the editor of 2000AD) Now they liked the pitch but hated the title so I was out. My brother and two small nieces came to show support and were delighted to see someone dressed as Batman. Later in the car, eldest niece told me I looked like the Joker because I was so pale. Tsk.

All good experience and I'll check it out again next year.

In other news, I started the Intro to Counselling course at Birkbeck and very good it was too. I may start another blog to record events as they unfurl. Obviously, that's just what I need, another displacement activity.

TO DO LIST: Just Desserts, Napalm review (The Edge Of Love), the next fifty pages of the Red Planet entry, production meetings for Justin Hustlin and the new SF novel that I keep dreaming about. Literally. Oh, and I'm still Secretary-General of the United Nations because being a 21st century woman, I have, of course, given up sleep.

Well, it's been a little slice of heaven but I must dash.
Posted by Elinor at 06:27

Well. I think they're a bunch of stinkers for rejecting the pitch because of the title. Good luck with the rest of it, including the counselling course xx

Outrageous! The nerve of them. I hope you smothered them with your maidenform, m'am.

OOh El you're so busy!
Not liking a title is truly crap reasoning..

Thanking you, laydeez! I may well have a crack at publishing it myself in cartoon form. That'll show 'em...

wheee! well done for getting out there and pitching - i'd have shit myself!

looking forward to your new blog about counselling!

Funnily enough it wasn't that scary. I stood in front of the panel with my back to the audience. They played supposedly spine-tingling music for the ten seconds I was on and that was it!

Nuts. Interestingly, my MUM of all people wasn't keen on the title when I showed her your Visual Pitch, she said it was and I quote "too obviously funky".
So what shall we call it darlink - how about