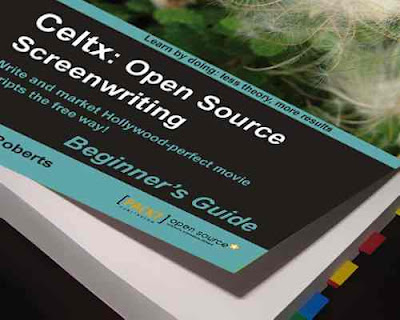 Don’t be put off by the Beginner’s Guide title. This is an easily accessible book for beginner and accustomed user of screenwriting software alike. I’m a convert to free Celtx from expensive Final Draft and always suspected I was only ever using a fraction of its power. You know how it is; you’re a busy writer, you’ve used Final Draft, how difficult can it be to switch to Celtx? It is easy, or at least I found it so but I ended up skating the surface of the program. As it says on the front of the book ‘learn by doing’. Well I did when I started using Celtx two years ago, but without realising there was a lot more.

My interest was piqued by a fellow writer’s mention on Twitter that http://www.packtpub.com/ was looking for reviewers to blog about the book. I’m thankful that the book is as approachable and useful as it states on the cover as reading it and then writing about it would have been a very dull task indeed. It is a manual with both utility and inspiration. The author is generous with his support of writers because he realizes how difficult it is to sustain ideas and how to crack a very difficult market.

My approach, and I guess for a lot of other users too, is to read the book with my own projects open in a Celtx window so I could test out all those exciting new buttons for myself. This was a revelation! Not only did I discover all the new aspects but it was written in a refreshingly jargon-free conversational style that made me feel like I could actually do it without being either a total geek or an ignorant technophobe. Roberts is very good at removing the technofear! Though all the screenshots were for a PC user, it was easy to translate for a Mac user (the windows aren’t THAT different). Don’t be put off by the amount of pages by the way, readable chunks of informative text are broken up by the relevant screenshots and it’s easy to go back and check where you are in terms of your own project and which aspect you’re trying out.

As a writer who has written many shorts over the years, one or two features and a novel, I felt I needed to organize all these different strands of my writing practice in a way that makes them easily retrieveable. The most

exciting part for me (yes, screenwriting is exciting!) was the realization I could ‘contain’ my projects within Celtx; logline, outline, beatsheet, storyboard etc each has its own tab within the project. If you’re interested in the production scheduling side of film production, you can do that too with sketches, camera angles, music, research images. This containing element was the most compelling thing I discovered and takes the headache out of tracking down specific drafts of a project.

The sample scripts were very informative too, with the added bonus of being able to apply the different effects of the formatting to them to create templates suitable for different markets worldwide. They’re all classics of their genre too, which helps as they are well known. Roberts constantly reminds us of pitfalls that bedevil the newbie writer; Not numbering the scenes for a spec script or including camera angles. He encourages us to explore how our stories will work in other formats by converting a screenplay to comic book example. I found his approach to refreshingly unstuffy but also quite painstaking without being patronizing.

So to look at the blurb on the front cover: ‘Learn by doing: less theory, more results’ I found to be accurate. This book is both technical manual and good on the theory of scriptwriting. Roberts encourages to write in the present tense, to prepare for the script by writing a good outline or treatment (all contained within the same project, remember, for efficiency). Further, he exhorts us on the cover to ‘Write and Market Hollywood-perfect scripts the free way’. Well, yes, there is certainly no excuse to send out badly formatted script that guarantee your opus a place in a busy executive’s paper recycling bin or more usually computer trash icon. Your script should be the very best version of itself that it can be, honed, polished, good structure, compelling characters, cunning twists and real emotional heart. Roberts gores into the history of this touching upon Aristotelian dramatic theory and how storytelling as a human occupation comes to us from out early ancestors. And Celtx is free. As Roberts is keen to state, the creators of the program can make it free by advertising inexpensive add-ons that enhance the program but are by no means essential. Though I bet there are producers out there salivating at the packages available for relatively little money In these days of cutbacks and the rise of Indie and low-budget filmmaking, Celtx seems doubly relevant.

I liked the double-pronged approach of the book and Roberts’ approach to the subject. Neither too techie, nor too theoretical but good composite of the two. If, like me, Robert McKee’s ‘Story’ made your eyes bleed, then this could be a good place to start. Which isn’t to say that if you’re new to screenwriting you shouldn’t read other books on the subject. Blake Snyder’s 'Save the Cat' is given honourable mention here, as are other books on writing and producing and especially formatting.

When I had Final Draft, the book that came with the disk was informative and a good quick reference guide but was strictly technical and rather dry. Roberts’ book feels like a conversation or one-to-one tutorial. As someone who writes every day, it’s a book I would have open on the desktop to consult. It’s easy to find what you need to know with the extensive index and indeed you can open up help windows on Celtx itself. There really is no excuse for not making your script as professional as possible.